This article was written exclusively for Investing.com

In the interim, Bitcoin traded to over $65,500 and to above $4,400 per token. The current prices are looking mighty good compared to where they were at the end of last year, but don’t tell that to anyone who decided to pile into the leading cryptocurrencies near the highs.

Parabolic market moves are like shooting stars. When gravity hits a parabolic market, the result is often price carnage. Everyone loves a bull market, which tends to become magnetic. Like a game of musical chairs, when the music suddenly stopped in April and May, the latecomers were left without chairs, holding Bitcoin and Ethereum long positions with massive losses.

While the decline has shaken the confidence of market participants, it has only made the diehard devotees more excited. Lower prices offer an opportunity to load up and buy more tokens.

The degree of reward is always a function of risk in any market. The highly volatile cryptocurrency asset class has plenty of reward potential but carries a commensurate risk level.

Not a question of if, but when the correction would occur

It is still challenging to imagine that an asset that was going for five cents in 2010 rose to over $65,500 in 2021. I have been involved in markets for over four decades and I never witnessed that type of price appreciation. The only examples from history are from economies that suffered during hyperinflationary periods.

Meanwhile, cryptocurrencies remain an emerging asset class. For many, the attraction appeals to a libertarian ideology that removes the control of the money supply from the hands of governments.

Governments derive power from controlling the purse strings. Cryptocurrencies are a direct challenge to that power, which is a roadblock for future success.

However, with limited supplies fueled by bullish trends, Bitcoin, Ethereum, and the over 10,600 other cryptos reached lofty levels in 2021. While devotees of libertarianism have ideological reasons for holding cryptos, many others became mesmerized by the prospects of turning a small investment into a large fortune.

After all, someone with the foresight to buy $100 of Bitcoin eleven years ago at five cents per token turned that small cash outlay into over $130 million at the April 14 peak. Even though Bitcoin dropped to the $33,000 level as of June 25, the investment was still worth over $66 million.

The price action tells us that cryptocurrencies rose to unsustainable levels.

Bitcoin, Ethereum, and the other cryptocurrencies may be a burgeoning asset class, but they are still asset markets. Ideology and fortune-hunting aside, they move higher when buyers are more aggressive and lower when selling dominates buying.

After four decades in markets, I learned that fundamental supply and demand analysis goes only so far in determining the path of least resistance for asset prices. The market sentiment that creates trends can be a far more powerful indicator of price direction. Therefore, when markets are rallying, they tend to move to levels few analysts expect.

Conversely, when they decline, prices can fall to an illogical, unreasonable, and irrational level. Less liquid markets tend to experience the most dramatic moves as selling can disappear during rallies and buying can evaporate during downside corrections.

Cryptocurrencies have limited supplies, and sentiment tends to focus in one direction, causing extreme moves higher or lower. Picking tops or bottoms during moves becomes an exercise in ego.

Market participants that attempt to pick tops or bottoms are going against trends. While countertrend trading or investing can create profits at times, it increases the chances of losses. More traders and investors have lost their shirts by ignoring influential market trends than by following them.

Trade with the trends; they are your only friend as sentiment rules

Successful traders and investors know that the trend is your best friend until it bends. Since late 2017, when the CME introduced Bitcoin futures, there have been five significant trend changes. 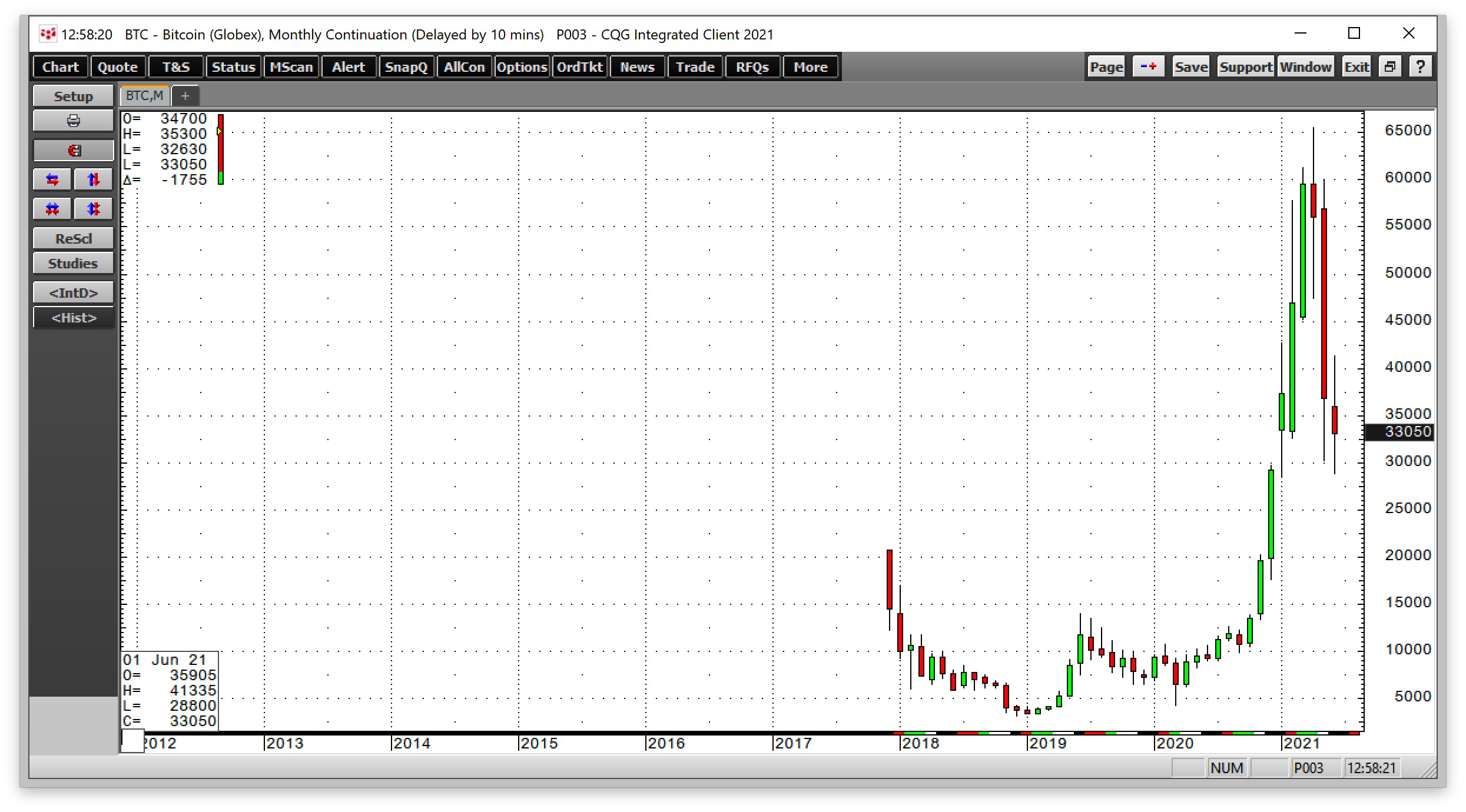 The monthly chart highlights the five significant trend changes since Bitcoin futures burst on the scene in December 2017:

A trend-following system is currently short Bitcoin and many other cryptocurrencies as sentiment remain bearish with the recent price action.

Bitcoin and Ethereum have the critical mass traders require

Many crypto devotees believe the current corrective period is the perfect opportunity to load up on Bitcoin, Ethereum, and other tokens. Many smaller cap tokens continue to attract buyers looking for the next crypto that will deliver Bitcoin and Ethereum type rewards.

Buying the smaller tokens is nothing more than a highly speculative investment. Most of the over 10,000 cryptos filling computer wallets are likely to wind up as worthless dust collectors. However, there could be a few diamonds in the rough that will deliver substantial returns over the coming months and years.

Meanwhile, trading and investing are two entirely different animals. Traders follow trends, understanding that liquidity is essential. The ability to execute buying and selling orders on a tight bid-offer spread is crucial for a trader’s success. While even the most liquid cryptos can experience massive price moves over short periods, the odds of price gaps decrease as a function of market caps.

Bitcoin and Ethereum have enough critical mass and liquidity for trading. However, they both can be highly volatile, so traders should only approach risk positions understanding that the potential for profits is a function of the risk, which is exceptionally high.

Trading cryptos involves looking to take a significant percentage of a price trend from the market. Trading with the trend does not include buying the low or selling the high. Moreover, trend-following traders will always be short at bottoms and long at highs. The goal is to capture the meat of a move and ride it higher or lower to achieve a maximum return.

The sentiment is critical when it comes to the path of least resistance of any market in any asset class. Respecting sentiment is the first step in profiting from a bullish or bearish trend.

Identifying a trend becomes a validation of the current sentiment and requires removing all emotion and ideology from the equation. At the same time, it removes stress from the equation as stress comes from thinking and overthinking a trade. A sentiment shift leads to action. In markets, trend followers do not think—they react to market conditions, blocking out all other noise.

Therefore, following the sentiment removes any sentimentality from the equation.

Over the past weeks, Bitcoin and Ethereum tanked with prices less than half the levels at the April and May highs. While some market participants view the current price levels as a bargain, I remain agnostic. The price action will tell me when to be long. As of June 26, I continue to ride the current trend, which is lower.