The largest digital coin rallied on Monday to near $35,000 after wobbling down to around $30,000 over the weekend.

Bitcoin pushed higher as proponents took the U.K.’s crypto crackdown in stride after the digital token traded above a key technical level over the weekend.

The largest cryptocurrency advanced as much as 8%, and recently traded at around $34,580 in New York trading. The broader crypto market also climbed, with the total valuation up about 5% to $1.44 trillion, according to CoinGecko pricing.

In one of the most significant moves to date by a regulator amid a global crackdown, Binance Markets Ltd., an affiliate of top global crypto exchange Binance, was banned Sunday by the U.K. financial watchdog from doing any regulated business in the country. Huobi, one of the most popular cryptocurrency platforms in China, said Monday that users in the country are prohibited from trading derivatives.

Crypto bulls often interpret tough regulatory action as a sign that the market is maturing. They also appeared to take further encouragement from Bitcoin’s failure to breach the closely watched $30,000 support level over the weekend. 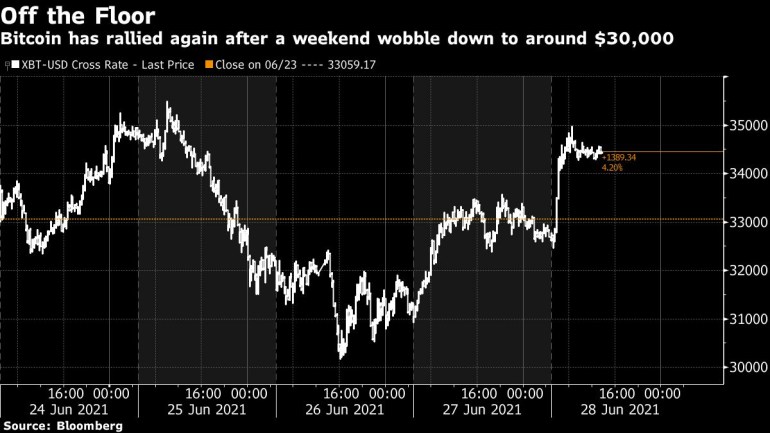 “We’re seeing the $30,000 level on Bitcoin being defended quite well with a number of tests at that level over the past month,” said Vijay Ayyar, head of Asia-Pacific at crypto exchange Luno Pte. “We saw a lot of downward pressure on prices being defended, so this looks quite bullish at this point.”

Bitcoin has lost about half its value in recent weeks amid concern on its environmental impact and as regulators globally — notably in China — crack down on the industry. The digital currency reached a record near $65,000 in mid-April.

For Luno’s Ayyar, it is too soon to give the all-clear.